Road to Recovery is a successful model Methadone Maintenance Treatment Program (MMTP) in the criminal justice system that has been in existence for over two years. It was created by the Anne Arundel County Health Department in Maryland for the previously and/or currently opiate addicted population who became incarcerated, generally for drug related offenses. Its goal was to decrease recidivism, relapse and overdose rates after their release from custody. 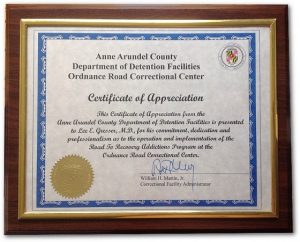 Thanks to the foresight of a proactive correctional facility administrator, William H Martin Jr. and the grant that made this possible with a team of medical professionals and correctional personnel, we were able to decrease the number of repeat offenders for drug related offenses from 50% to 12% after the first 1 1/2 years. Relapse rates fell almost 90%.  In addition our overdose mortality rate was ZERO with access to a community MMTP immediately following their release.

The taxpayer savings amounted to a fourfold increase of up to $30,000 per year per inmate per one year of incarceration; most served sentences were shorter-term. This did not include the prevention of dollars lost from recurrent begging, borrowing and stealing in order to obtain more illicit drugs after release.

A workshop presented at the national AATOD conference in Philadelphia last year showed these preliminary results and is on their website. Hopefully this information will be brought to the attention of agencies at every level of government including Federal, State and County correctional and detention centers throughout our country so that we as a team to make a difference

In Mr. Martin’s personal experience in the criminal justice system over the past 30 years, this has been the only effective program that has demonstrated what we have achieved.
Posted in Addiction, Correctional Facilities, Drugs, Methadone

Comorbidity What is Methadone?